The London Contemporary Art Auction Week is over, and what a week it was...

Christie's held their best London Post-War & Contemporary Art  sale ever, a 43% increase on 2017 with a sell-through rate of 92%. The sale totaled $ 189.9million and is leading the week.

Sotheby's had not the best but one of their best sales ever in London, totaling $ 151.7million and with a sell-through rate of 95%.

The big winner of the week though was Phillips. They held a triumphant evening sale which totaled $ 135.2million with  a sell-though-rate of 92%, up a whopping 650%  from last year's result of $ 17.9million.

The sale set a record for Mark Bradford's epic Helter Skelter I ,  saw Picasso's La Dormeuse epicly soar past its estimate of GBP 12 - 18million and hammer down at GBP 37million, and elicited an excitement and vibrant energy that otherwise the sales of this week totally lacked.

You can see from the chart above how Phillips really catapulted themselves into a whole new league, up to the level of Christie's and Sotheby's. What made their evening sale so successful, and why did it have the sparkle and the energy that made several lots fly well beyond their estimates, with active participation from the room and a clearly committed audience, while at the other two auction houses both evening sales actually felt like coaxing bids out of the specialists on the phones, in front of a bored audience that totally lacked excitement?

For sure, the estimates played a big part. Estimates at Sotheby's and Christie's were very ambitious, and apparently before the sales they felt the interest from bidders didn't quite match - so bidding for most of the lots started way below the low estimate and climbed painstakingly slow, often only to just reach the low estimate. This always makes a sale feel like a failure and the bidding not exciting - even if it actually is adding up to record total sales like it happened this week.

Phillips were more wise with their estimates and it seemed people felt there were more opportunities. That gave the sale that certain kind of sparkling energy right from the start which makes magic happen.

However, with all the celebrating Phillips and their success, we have to remain fair with the numbers: Christie's and Sotheby's sales were pure Post-War & Contemporary Art Sales, while Phillips' sale contained a mix of 20th Century pieces and Contemporary Art, and a big part of the success of the sale was actually made up by Modern Art lots (the Picasso, the Moore). So, in order to get a clearer picture of who is leading and which category was more successful, we split the numbers up into Modern/Impressionist Art sales totals and PWC sales totals:

Two things become clear from the analysis above:

1. Modern / Impressionist and not Contemporary was the leading category in this year's London February / March sales.

2. In both categories, Christie's is leading over Sotheby's.

3. For the total numbers, Phillips is of course not as close to Sotheby's and Christie's as it would seem from looking just at their Evening Sale result (which was very close to the other two house's results) - but you can see how they are anyhow approaching a new level with a market share of 15%. That's quite impressive if you think that they don't have the financial means to play as big in the guarantee game as Christie's and Sotheby's.

Maybe these sales are also showing that it is not the orchestrated & manipulated guarantee auction spectacle which buyers want, but the "real" auction with all its eventualities?  Well then, sellers obviously don't see it that way. Or do they? When Josh Baer, advisor to John McEnroe, was asked why they put the Bradford "Helter Skelter" into Phillips instead of one of the other two houses, he answered that it would be given more attention and marketing at Phillips than being just one among many top lots at the other houses. This is true and also worked for the Picasso.

4. If  you look at the average prices, Phillips for the first time in their history has a higher average price in their auction than Sotheby's, almost as high as Christies. 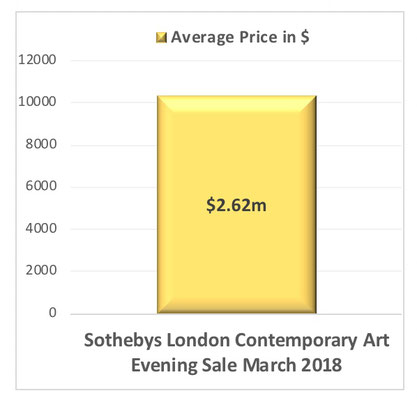 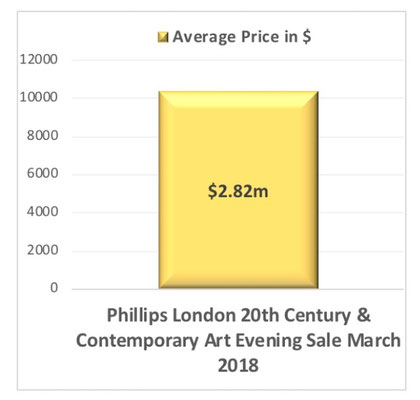 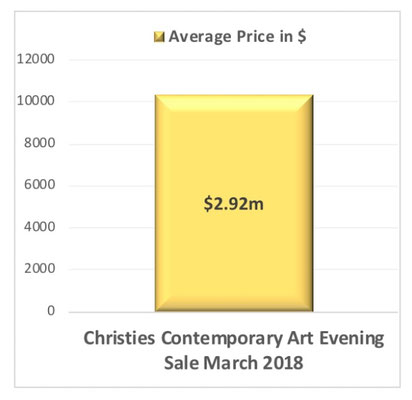 Interesting is also a look at the Price structure of the individual auctions: While all three auction houses had a similar number of lots over GBP 10million final price with BP, it is the price level between GBP 2million to GBP 10million where Sotheby's and Christie's are holding strong with 28.5% of lots in the auction sold in that level - while Phillips has only 9% of lots in that level. 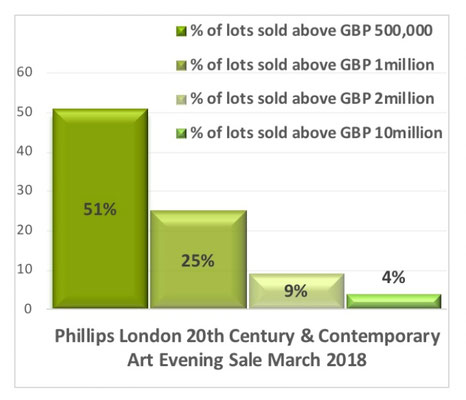 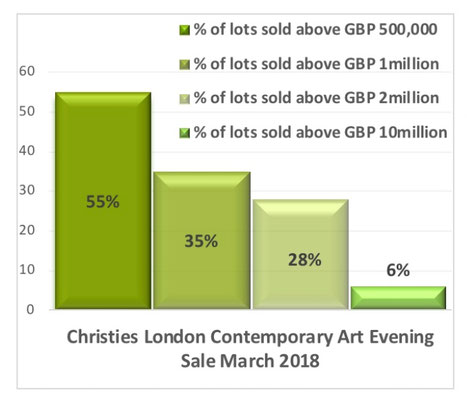 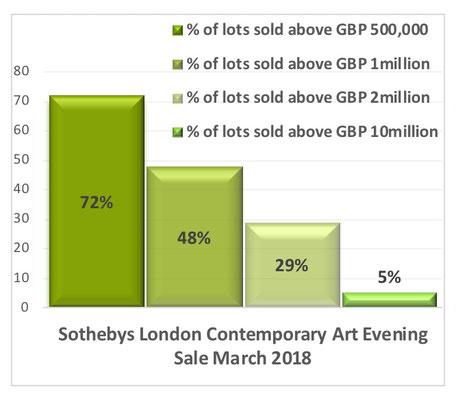 Now, what about the Day Sales?

Let's take a look at the chart below. All Day Sales are clearly up from 2017 (Phillips 65%, Sotheby's 56% and Christie's 40%). In this section, it is important to also mention Bonhams who held one of their best Contemporary Art Sales ever which totaled $7.3million with fees and saw several lots soar past their estimates, and moreover, a high percentage of lots in the six-figure range. Actually, if you look at their average price and the price structure of their auction, they had a more high-value auction than Phillip and Sotheby's did. 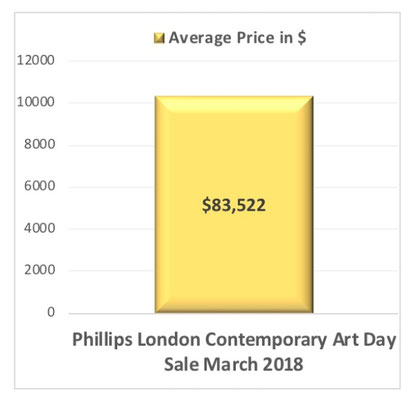 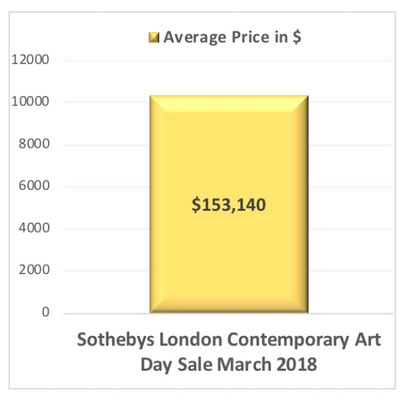 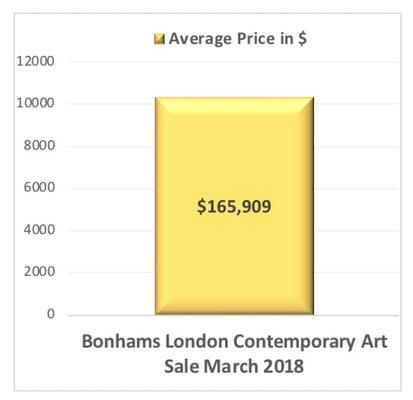 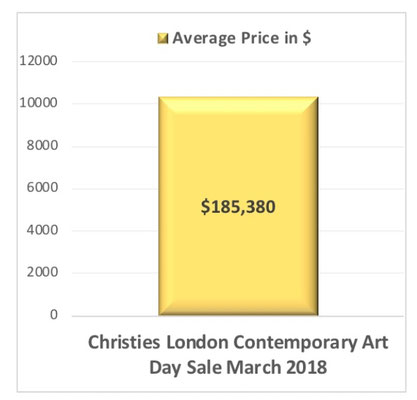 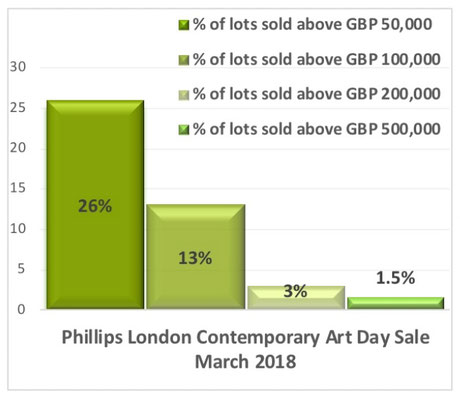 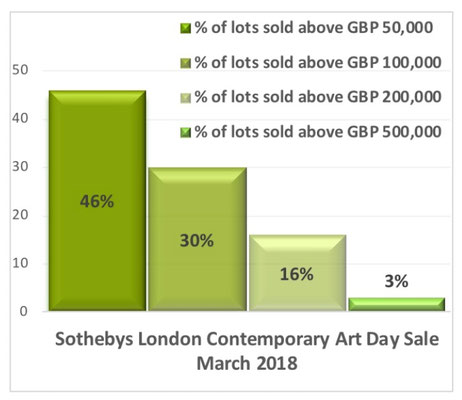 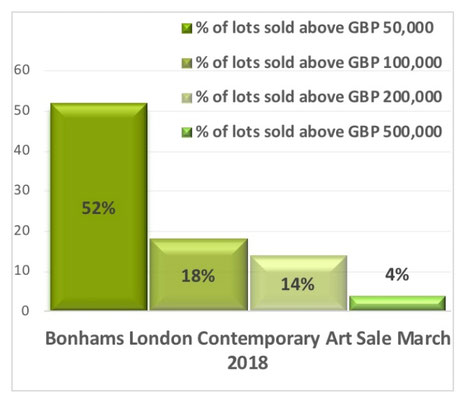 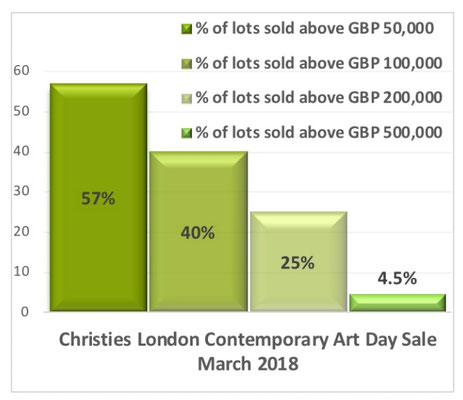 For the complete picture, let's recapitulate also the Modern/Impressionist/Surrealist sales.

Like during the Post-War & Contemporary Sales, both evening sales at Christie's and Sotheby's lacked energy and buzz, which led to several almost painfully long bidding sceneries where the auctioneers (Jussi Pylkkänen and Helena Newman) desperately tried to coax bids from the room or from their specialists. Sale-through rated were modest and most lots went barely above or even below their low estimate.

But on a brighter note, some lots elicited excitement from bidders and flew well beyond expectations (the small Kandinsky landscape at Christie's; the Boccioni at Sotheby's). And then there was the strange run for Picasso works, caused mainly by one man: Harry Smith of Gurr Johns who bought 12 Picasso works in 2 days.

Let's take a look at the numbers:

After a stellar Modern & Impressionist Evening Sale in 2017, Sotheby's took a hit this year and saw their Evening Auctions sales totals down by 30%, which reverted the ranking from last year and put them in second position after Christie's. Christie's managed to also achieve better sales totals for their Modern & Impressionist Day Sales; so they are clearly leading this year.

However, this year's combined sales for Modern & Impressionist Art lagged behind last year's (down 9% from 2017). This is mainly caused by Sotheby's underperforming Evening Sales. Christie's Evening Auctions sales totals are up from last year, and so are the Day Auctions Sales Totals for both houses, as you can see from the charts below.

Conclusion: What do we learn about  the Art Market from the London 2018 Winter sales?

Even if during the auctions at Sotheby's and Christie's it didn't feel like it, the market is strong.

In Post-War & Contemporary Art, it is clearly up from 2017, in combined sales and individually for all auction houses.

In Modern/Impressionist Art, the Combined Sales Totals are down 9% from 2017,  mainly because Sotheby's sales totals are down. For Christie's, sales in this category are up from 2017.

So, the general outlook is positive with very strong growth in Post-War & Contemporary Art.

However, it is a very selective market where buyers all want the same, and where lots which don't match the "wanted" criteria have a high potential to fail. This is especially valid for the top end, where bidders are more price-sensitive than they were in 2014/2015, and where a common sense between the bidders that only the best of masterpieces is worth bidding/buying makes it hard for the auction houses to succeed.

It is not enough anymore to just have good art and sell it. You have to have exactly the art that is currently en vogue, put the right estimate on it and throw on a marketing machine before the sale to ignite excitement.

It is becoming harder and harder to sell art, but at the same time the market seems to get stronger and ready to reach new record highs. The main problem seems that it has become too narrow in the past three years and the broad base it once had is now very small. This makes dealers and auction houses go for the safe and obvious - a strategy which could also clearly be observed at 2018 TEFAF Maastricht, where it felt like every dealer brought a Picasso portrait, a Stingel , a Hartung or a Condo. Or the more local approach, Cobra and Zero. (see the TEFAF 2018 Report HERE)

This is in line with two quotes the New York Times had in their article about the London auctions:

“It’s a conservative market,” said Brett Gorvy, a former head of postwar and contemporary art at Christie’s. “People are looking for tried and trusted names with a track record.”

“Everything sells within the expected range, and it comes around again and again. This is what we want,” added Thaddaeus Ropac, who appeared gratified by the market’s stability and predictability. But, he added, “It’s a bit boring.”

However, just from looking at the numbers, the London Auctions were a promising start into 2018. Let's see if the May Auctions in NY can keep up with it.